He gained public recognition for the first time in 1991 with his spectacular solo ascent of the three largest north faces in the Alps, the Eiger, Matterhorn and Grandes-Jorasses.

So far, Robert Jasper has climbed the north face of the Eiger using 16 different routes, including the first solo ascent of the ‘Spit Verdonesque Route,’ which only took him four hours.

Robert Jasper climbed thenorth face of the Matterhorn solo using two different routes, including the new 1,000 m ‘Freedom’ route, which took him five days in Alpine style. It took Robert Jasper just 12.5 hours for the solo ascent of the 900 m north face of the Pilier d’Angle (using a new route) and the first solo ascent of the 700 m Abominette route on Freney-Pfeiler Montblanc.

Grandes Jorasses: Robert Jasper climbed the ‘Linceul’ line through the north face of the Grandes Jorasses in just 2 hours 20 minutes. The first free ascent of the 1,100 m ‘No Siesta M8’ traverse in three days in Alpine style. This is considered to be the most difficult mixed route in the Alps.

In 2001, he set himself the goal of being the  first to climb the 1,600 m direct southwest pillar of Bhagirati III, 6,454 m, the Gharwal-Himal equivalent of the north face of the Eiger . The Himalayan expedition failed due to poor conditions and a snowstorm.

Nuptse East 1, at 7,804 m, near Mt. Everest, is the one of the highest and most difficult in the world. After more than four weeks of hard climbing and more than 2000 vertical metres on up to 90° ice and VII A3 cliffs, Robert Jasper reached the Diamond Tower, the summit of the pillar. The goal lay within his reach, but the attempt to be the first to ascend the summit of Nuptse East 1 was thwarted by a storm with wind speeds of up to 200 km/h.

The Cerro Standhardt may be  the third and smallest of the cliff and ice towers of the Cerro-Torre Group, but itstill presents an enormous challenge to climbers. Robert Jasper achieved what was probably the fourth ascent of the mountain using the Exocet route.

At 3,128 m, the Cerro Torrein Patagonia is one of the most difficult mountains in the world to climb. In just 16.5 hours, Robert Jasper achieved the world’s fastest ascent from base camp using the ‘Maestri Route’ in Alpine style. In 2005, Robert Jasper climbed a new route in the north face of Cerro Murallon, the great forgotten wall of Patagonia.

It is likely that the summit had only been reached once before, twenty years previously by an Italian expedition. Denali (Mt. McKinley,) 6,194m, in Alaska is the coldest mountain in the world. In the space of just four days, Jasper reached the summit twice using different routes.

Numerous new routes in the ice / mixed sector: Flying Circus M10, No Limits M13 and Mission Impossible M11 on sight and in ice: e.g. Betablock Super WI7 at the most difficult levels in Europe, the USA and Canada. 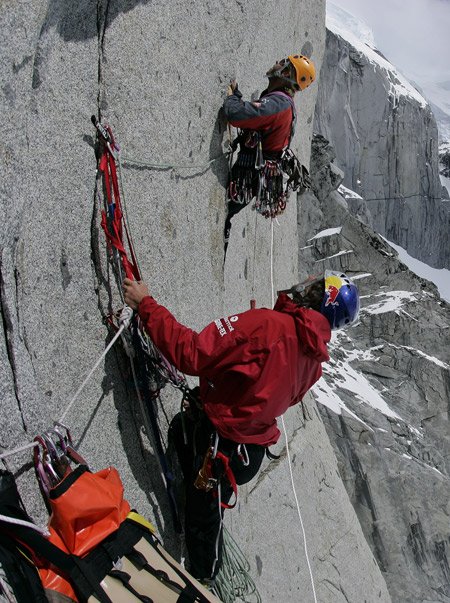